What is a Trusted Research Environment?

The Art of Collaboration: Transparency & Data Sharing in Research Just a quick glance at Dr. Benjamin Haibe-Kains’ Google Scholar profile can be mind-boggling: the sheer quantity of publications and the variety of different international collaborators is really impressive for researcher this early in the game. Let’s delve into his secrets for establishing multidisciplinary collaborations while at the same time understanding how he assures reproducibility of his work.

Benjamin is the quintessential example of how to best leverage published biomedical data: he and his team rely on either public datasets or on data generated by collaborators to answer novel research hypotheses. Benjamin’s research focus is composed of two axes: 1) radiomics, the analysis of radiological images (i.e. CT scan, MRI) to understand tumour progression in a non-invasive and global way, and 2) pharmacogenomics, where Benjamin and his team work with data pertaining to molecular and pharmacological profilings of different cancer model systems (i.e. cell lines, organoids and xenografts). For the first research axis, Benjamin relies 100% on data and images being acquired from collaborators, whereas for pharmacogenomics, about 80% of the data comes from public sources and 20% comes from collaborators.

Benjamin builds his collaborations on both human interactions and scientific needs. He recognises the need for social intelligence to create a productive network of collaborators. However, it’s the very nature of Benjamin’s research model that favours collaborative work on projects.

Being as Open Source as possible

However, there is another source of potential collaborations that is strictly dependent on Benjamin’s enthusiasm for open science. For Benjamin, a critical component of excellence in science is making sure that everything he does is open source and reproducible. This means that the code, data and even the software environments his group uses to run analyses are shared and documented to maximise dissemination to whoever is interested in accessing this information. This open approach to science allows for an open and honest conversation about methods and results.

This extreme openness is often seen as a weakness by other researchers. Often, there is the misconception that such openness with data and the inner workings of the lab, can lead to unwanted scooping. But for Benjamin, about 99% of the time, sharing was beneficial for him and his team, where they gained way more out of it than they gave away.

Importantly, sharing also opens the doors to foster collaborative relationships with other like-minded researchers. The open approach to science allows other researchers to use what Benjamin’s group has done, while leading to constructive scientific criticism about his work. This enables Benjamin to engage in conversations about how analyses could have been done differently, allowing his group to build and strengthen analysis workflows (here is a perfect example of how Benjamin and his group have engaged in critical discussions regarding inconsistencies in pharmacogenomic studies). This, in turn, fosters new collaborations just by letting other researchers in the field scrutinise what they do, reuse what they do, and finally engage in conversation about how things could have been done better and how the same analysis could have been performed in different settings. 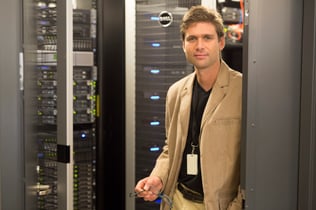 Dr. Benjamin Haibe-Kains is a trained computer scientist and earned his PhD in Bioinformatics at the Université Libre de Bruxelles (Belgium). He then went on to complete his postdoc in the Quackenbush group at the Dana-Farber Cancer Institute and Harvard School of Public Health. Today, Benjamin is a Principal Investigator at the Princess Margaret Cancer Centre and Associate Professor at the University of Toronto,  in Toronto, Canada. His research focus revolves around the integration and analysis of high-throughput data to answer questions related to cancer.